Children who are being emotionally abused by a parent after/during a divorce, and are being actively isolated from the other parent, suffer a lot. Situations, where children are kept 'trapped' in the web of a parent with severe parental alienation behavior, must be seen as child protection issues, where proper interventions should be undertaken. Psychological child maltreatment and abuse should be taken very serious and stopped when happening.

How a large imbalance of power over and influence on a child (due to custody imbalance) fuels and creates even more ground for alienation -and in time breaks down the child-parent bond further due to a lack of association with normal life experiences with the socially excluded/alienated parent.

(How) do we enable kids to maintain a normal and realistic view of both of their parents after a divorce?

Lots of negative psychological effects can and will occur when the child does not get the chance (anymore) to live life in a normal way with each of the parents after a divorce, while before there was a normal relation and attachment with both parents. Suppression of the natural attachment system (to a parent) is a very important one, giving stress and other related issues.

The following graphic depicts the situation of a child who is being physically (and consequently also socially) isolated from parent-2 by parent-1. Also the new partner and network surrounding the child (with parent-1) and even professionally involved people, like from CPS, (when not educated/trained in P.A. dynamics and miss to see the counter intuitive signals) could add to this alienation process.. 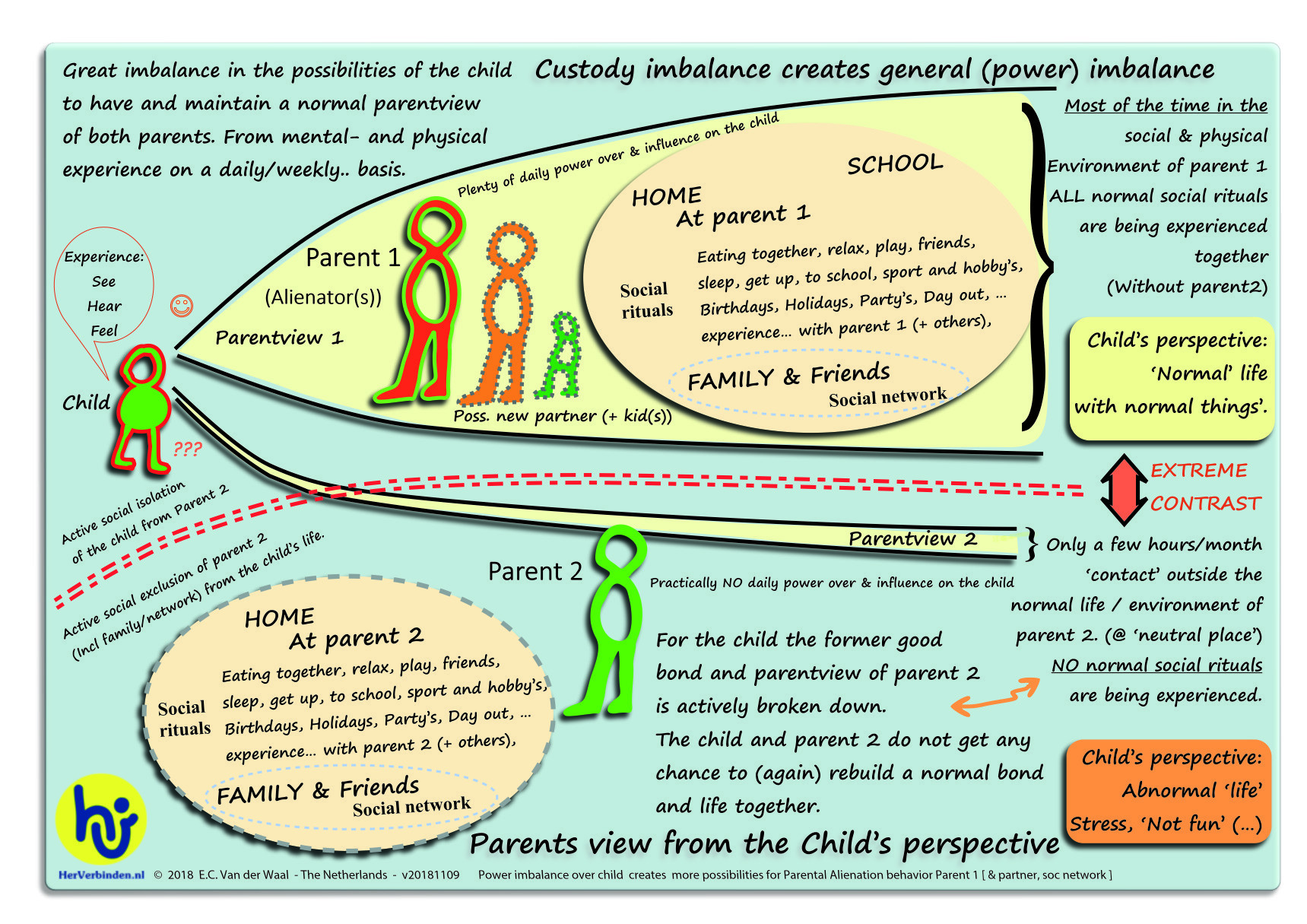 The picture shows the impossibility of the child to restore and to (re)build a normal view/image of parent-2 and association with normal life, because of it's (physical) isolation from it.

As we more and more realise, know and learn is, that a big imbalance of 'custody' time of the child between both parents is confirming the power and influence over the child by parent-1. As a result of this imbalance, the child's perspective is that it 'lives with' parent-1 and 'visits' the other parent. The court can make a change in the power imbalance, to support a firm process of restoring the bonding and relationship of the child with the alienated parent (and family / social network).

"To live is a chain of experiences in time, at certain places on earth"

The isolated child experiences and associates parent-1 (with active parental alienation behavior) with all aspects of life, while parent-2 is more and more alienated, put at a distance, because the child is not enabled to associate parent-2 with any form (experiences) of normal life, just because the child isn't put in the position to be in the normal environment of parent-2 for longer periods of time (days/weeks at a time). All social rituals are experienced with parent-1, not (or almost none) with parent-2.

In many cases Child Protection Services keep the children (for too long) away from the child's normal social envionment. In my opinion the place a child should be is: 'at home' with the mother or 'at home' with the father (when they both have a normal home to live). There is usually no need at all for a child to get comfortable with or even attach to an 'child-friendly' environment at some office of a CPS, or another so called 'neutral place'.

There are no neutral places if there is a parent (i.e. parent-1 in the picture) who is promoting this to be 'the best for the child' to 'see' the other parent (parent-2). The added message to the child is that it is not ok to go to the other parent's (parent-2) home. The child gets confirmed by the behaviour / organisation of the CPS workers, that there is 'something the matter with / not safe to be in' the home of parent-2. Why else should the child be kept away from the home/environment of parent-2 ?

Should the child conform to the internal organisation and workagenda's of the CPS, or should the CPS organise itself to adapt to the life of the child they should protect and restore a proper relationship with both parents with? I think the latter.

What do you think?